Document Type : Journal of Mathematics and Modeling in Finance (JMMF)

In this paper, we considered the long-term health insurance as a sequence of annual health insurance policies. To improve the disadvantages of long-term health insurance, we specify the optimal contract including optimal insurance premiums and optimal insurance coverage for the healthcare costs using a negotiation model. We considered two case of known and unknown initial health state. The predictive model for healthcare costs was determined as a time series and state-contingent models. Since the health state changes over time, the insured tends not only to be insured against risk according to her health state, but also to be insured against reclassification of risk. The insurer also seeks a fair premium appropriate to the insured's risk. To achieve this, we determined the optimal contract based on the negotiation model, in which the negotiation parameter is calculated based on the Nash solution. The optimal premium is independent of health state so that the insured is safe against reclassification. However, the insurer coverage is state-contingent and protects the insurer from detriment. Moreover, due to the uncertainty in estimating the parameters of the prediction model, we specified the projection interval by using the bootstrap method for optimal insurance premiums in the coming years. Thus, the insured is aware of the premium intervals at the time of signing the contract with the insurer. 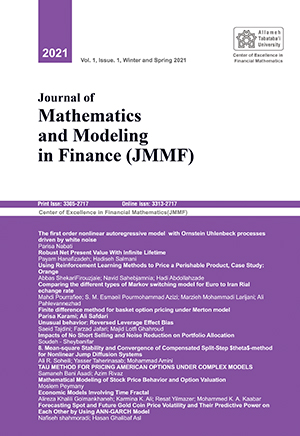